In our previous Post we have already studied about “what is power factor?” Now, in this post we will study about the “disadvantages of low power factor” and we will also talk about the “types of power factor”. So, let’s start.

The low power factor is highly undesirable as it causes an increase in current, resulting in additional losses of active power in all the elements of power system from power station generator down to the utilisation devices.

In order to ensure most favourable conditions for a supply system from engineering and economical standpoint, it is important to have power factor as close to unity as possible.

That’s why a lot of emphasis is given on improving power factor specially in industries.

As we know that,

As we know that cables are rated to handle a certain amount of current flowing through them. So, if lot of large consumers with low power factor, are connected to the network then the cables could overload.

The suppliers could also struggle to meet the demand and capacity agreements. Moreover, no new customer will be able to connect to the utility until they either replace the cable with larger conductor size or install additional cables.

To understand this, let’s take an example.

Example: Suppose there is a single-phase AC motor having an input of 10kW on full load and the terminal voltage being 250V. Find out the input full load current at

Solution: There is a single-phase AC motor

Active power is given by

The input full load current will be;

From general definition of power factor, we know that

Now, the input full load current at 0.8 pf will be

Conclusion: If we compare case(i) and case(ii) then we will find out that at low power factor of 0.8, the current through the supply cables and motor conductors increased upto 50A. Therefore, the size of the conductor must also be increased.

The large current at low power factor causes more I2R losses in all the elements of supply system. This results in poor efficiency.

Note: The electrical machineries are rated in kVA because the power factor of the load is not known when the machinery is manufactured in the factory.

Now, as we know that

If large consumers have poor power factor, it means that they are increasing the current flow through the electricity network which introduce greater voltage drops across alternators, transformers, transmission lines and distributors which means that we will receive less voltage at our homes and offices.

This reduces the supplier’s distribution capacity and degrades the performance of utilization devices.

In order to keep the receiving end voltage within permissible limit, voltage regulators are required which increases the cost of operation.

The low lagging power factor reduces the handling capacity of all the elements of the system because the reactive component of current (ISinɸ) prevents the full utilization of installed capacity.

If large customers have poor power factor then they will increase the current flow through the electricity network which will result in voltage drop across all the elements of power system and increased copper losses. This reduces the distribution capacity of the suppliers.

Therefor, to compensate for their losses, customers having low power factor are charged by the suppliers which is known as Power Factor Penalty.

Why we should improve power factor?

Due to following reasons, we should improve power factor:

Basically, there are two types of power factor which depends on the nature (linear and non-linear) of the load:

In case of linear loads, the degradation of power factor is just because of the reactive component (inductor or capacitor) of the load.

As we know that, in case of purely resistive load, voltage and current remains in same phase which results in unity power factor.

But in presence of reactive element, a phase displacement is introduced between voltage and current due to which power factor goes down (becomes less than 1).

Power factor due to displacement between voltage and current is known as Displacement Power Factor.

Note: If the load is inductive in nature then displacement power factor can be improved by using capacitor banks.

In actual system, apart from linear loads, we also have non-linear loads. For example, inside variable frequency drives and servo drives, rectifier bridge is present which is non-linear load.

Because of this harmonic distortion of current, power factor gets degraded. So, in case of non-linear loads, power factor is known as Distortion Power Factor.

Now, in actual system where both linear and non-linear loads are present, the total power factor of the system is given by relation:

Watch “what are the disadvantages of Low power factor ?”

What is power factor?

Vaccum cricuit breaker and its working 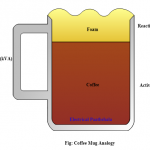 WHAT IS POWER FACTOR?