A Relay is a sensing device, which is used to sense the faults in the system. If any fault occurs in the system then the relay will send the signal to the circuit breaker to trip the circuit. The same concept applies with the buchholz relay. In this article, we will read everything about buchholz relay in a very effective way.

Buchholz relay is an important protection and monitoring device used to protect Large oil immersed transformers (generally rated above 750kVA), against incipient faults (slow developing faults) such as core heating, insulation failure of windings, fall of oil level due to leaking and other such internal faults.

Buchholz relay was invented by Max Buchholz in 1921. It is a gas actuated relay installed in oil immersed transformers, for protection against many types of internal faults in transformers which have rating of 750 kVA or above (It is considered to be uneconomical to use Buchholz relay for the transformers rated less than 750kVA).

This relay performs two functions as given below,

Buchholz relay is installed on the pipe which is used to connect the conservator and the transformer main tank as shown in figure below.

Buchholz relay is a domed shape vessel filled with liquid and it is placed in the connecting pipe between conservator and the main tank. As we have already discussed that it performs two actions hence, to perform these actions, it has two sections as shown in fig. below.

The upper section has a float connected to a hinge. A mercury switch is present just above the float. An alarm circuit is connected with this mercury switch which gives sound during incipient faults occur in the transformer tank.

Lower section consists of a mercury switch mounted on a hinged type flap. The flap is located in the direct path of the flow of oil from transformer tank to conservator, as shown in fig. below. This mercury switch gets closed during severe internal faults and it is connected with the circuit breaker to trip the circuit.

A glass slid is present with scales to check the oil level inside the relay from outside.

As we have discussed earlier that there are two functions performed by the buchholz relay, so we will discuss both of them in detail.

The products of decomposition contain more than 70% of hydrogen gas. Now as the hydrogen gas being light tries to move towards conservator and it gets entrapped in the upper part of relay chamber. As these gases are very light in nature, so they move directly to the upper part of chamber without disturbing the flap (lower section) present in the front.

When a sufficient amount of gas accumulates, then it exerts pressure on the float to cause it to tilt downside. So that, the mercury switch gets closed. This completes the alarm circuit and it will give an alarm.

Note :- We do not call immediate removal of the faulty transformer in the above-mentioned conditions, because sometimes air bubbles in the oil circulation system of a healthy transformer may operate the float. Steps are taken to verify the gas and its composition whether they are harmful or not.

Second situation :- Now, if a serious fault occurs in the transformer tank, then there will be enormous amount of gas is generated in the main tank. Not only the gases but the oil present in the main tank will start moving towards the conservator via Buchholz relay. When oil enters into the relay, it will hit the flap present in front, and this flap will tilt the other side of flap also, which ultimately tilts the mercury switch, and the contacts of mercury switch gets closed and it completes the trip circuit. Now, the circuit breaker will trip the circuit from main supply.

To understand the both situation in more clear way, I have taken an real life example.

Let us take an example of milk which is to be boiled. When we start boiling the milk, initially some vapours will release and they move upwards, but we don’t stop boiling here, we are still observing the milk. This is the first case.

Now, after some time when milk is almost boiled, then along with the vapours, the milk also starts coming upwards or out of the beaker. Now, in this situation we stop giving heat to milk. It means we trip the circuit. This is the second case.

Advantages of buchholz relay are as follows:

You can also refer the video of buchholz relay on my youtube channel.

Fuse and its types 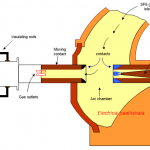 SF6 circuit breaker and its types