Oil circuit breakers are very important part of power system, they are responsible to make the system healthy.

The classification of circuit breaker is based on the medium which is used to quench the arc. In this section we will discuss about oil circuit breakers.

In oil circuit breakers, insulating oil is used as an arc quenching medium. When there is a fault in the system, the contacts of the breaker are opened (separate) and a arc is struck between them.

The heat generated due arc will dissociates the oil into a substantial volume of gaseous hydrogen at a high pressure.

Mainly hydrogen gas is produced as a result of decomposition but a small amount of methane, ethylene and acetylene is also produced.

This hydrogen gas will form a bubble surrounding the arc and the parting contacts ( fixed and moving ) as shown in the figure below.

The arc extinction is done mainly by two processes.

Types of oil circuit breakers are distinguished on amount of oil, there are further different types. We will study all of them,

They use oil for two purposes , one is for arc quenching and other is to act as an insulator. These are of two types,

a) plain break oil circuit breaker : these have simple construction and normal operation, they do not have any special mechanism to quench the arc.

They use minimum amount of oil, oil is used only for arc extinction, they insulation is done by air or porcelain material.

As we can see in the figure, there are two contacts , a fixed contact and a moving contact. The whole arrangement is fitted in a dome shaped chamber with oil filled in it up to a certain level, the air cushion(space for air) is given above the oil level.

The air cushion serves two benefits, it gives enough space for the arc gases without generating any unsafe pressure and it also absorbs the mechanical shock of upward oil movement.

There is a double break plain oil circuit breaker in the fig., it has two breaks in series.

In normal condition the contacts of circuit breaker are closed but When there is a fault occurred, the contacts of the breaker opened under the oil and an arc is struck between them,the arc extinction is done by following ways

In case of plain break oil circuit breakers, long arc length is essential to quench the arc, but it is very difficult when the value of current is large, then arc time has to be very low, so it has to be interrupted while the contact gap is still short, so special arrangement has to be employed to extinct the arc. There are two types of such breakers as follows

a) self blast oil circuit breakers : arc control is provided by internal means, arc itself is responsible for its extinction.

b) forced blast oil circuit breakers : in which external mechanical means are provided for arc control.

In this type of circuit breaker an insulating chamber or pot is placed which surrounds the contacts and gap between them as shown in figure below.

when there is fault occurred then the contacts will get separated under the oil and an arc is struck between them, now this area is surrounded by a pot or chamber so the turbulence of oil will create high pressure inside the chamber and it will interrupt the arc.

The magnitude of pressure developed depends on the value of fault current, as the pressure is generated by the arc itself , so it’s name is self blast oil circuit breaker.

On the basis of pot designing there are three types of self blast oil circuit breakers.

it has a rigid cylinder of insulating material which encloses the contacts as shown in figure, when there is a fault occurs in the system, the contacts will get separate and an arc is struck between them, the heat of arc will decompose the oil into gas at a very high pressure in the pot ,this high pressure will force oil and gas through arc path will extinguish the arc.

if the final arc extinction is not done still then the moving contact will move down (as shown in fig. below) will responsible for the high rush of gas and oil through the throat which immediately interrupt the arc.

The pot is made up of same material as of plain explosion pot , it has two channels on one side which acts as arc splitters which increases the arc length thus helps in arc extinction.

when fault occurs the moving contact will separate and the arc is initially struck at the top of the pot as shown in figure. The gas generated by the arc exerts a pressure on the oil in the back passage. when the moving contact uncovers the arc splitter ducts, fresh oil is forced across the path of arc as shown in the figure above. Thus the arc is driven sideways into the arc splitters which increases the arc length and causes the arc extinction. It is suitable for heavy fault currents.

It is basically a combination of plain and cross jet explosion pot. So it is suitable for large variety of fault currents.

The upper part is cross jet and lower one is plain explosion pot. When there is large short circuit current, the rate of generation of gas is very high and it behaves like a cross jet explosion pot, the arc extinction is done when the moving contact uncovers the first and second arc splitter duct and the further process is just same as of cros jet explosion pot.

when there is low short circuit current, the rate of gas generation is lower and tip of moving contact has time to reach in the lower chamber, now this will behave like plain explosion pot.

In the self blast oil circuit breakers the arc itself generate necessary pressure for its extinction.

Such breakers has a limitation that there arcing time is increased and operation is inconsistent when they are dealing with the currents lower than rated value.

This difficulty is overcome by the forced blast oil circuit breakers in which a necessary pressure is generated by the external mechanical means, a piston is directly coupled with the moving contact so that when a fault occurs the moving contact will move and the piston forces a jet of oil toward the arc to extinguish it. It is independent of fault current.

In bulk oil circuit breakers, the oil has to perform to functions , as an arc quenching medium and as an insulating medium.

Experiments have shown that only a small percentage of oil is actually used for the arc extinction purpose while the major part is utilised in the insulation purposes.

So, it increases the cost, tank size and weight and also the risk of fire hazards and maintenance problems of bulk oil circuit breakers.

A Low oil circuit breaker employs solid materials such as porcelain and other organic material for insulation purpose and a small quantity of oil which is just sufficient for the arc extinction.

The above figure shows the cross section of a single phase low oil circuit breaker, there are two compartments separated from each other but both filled with oil. The upper chamber is circuit breaking chamber while the lower one is supporting chamber. The two chambers are separated by a partition and oil is prevented from mixing with the other compartment, this arrangement permits two advantages.

(1) supporting chamber : It is a a porcelain chamber mounted on a metal chamber. It is filled with the oil which is physically separated from the oil in the circuit breaking chamber.

(2) circuit breaking chamber: It is porcelain enclosure mounted on top iof supporting chamber. it is filled with oil and has the following parts:

(a) Upper and lower fixed contacts

The arc energy vaporises the oil and produces gases at high pressure. This action constraints the oil to pass through a central hole in the moving contact and results in forcing series of oil through the respective passages of the turbulator.

The process of turbulation is orderly one, in which the sections of the arc are successively quenched by the effect of a separate streams of oil moving across each section in turn and heavy bearing away its gases.

This is all about oil circuit breakers, hope you liked my work, Give your valuable feedback in comment section . Follow us on YouTube for simple explanation of these topics. Thank you 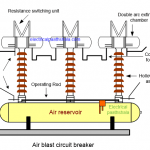 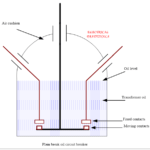